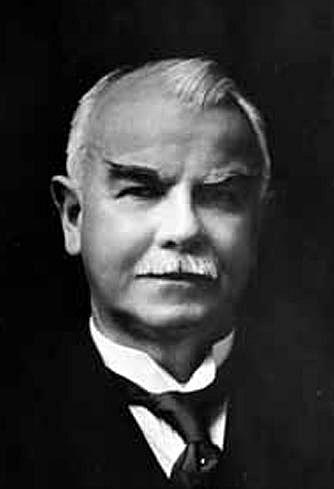 Sir James Alfred Ewing MInstitCE KCB FRSE FRS (27 March 1855 − 7 January 1935) was a Scottish physicist and engineer, best known for his work on the magnetic properties of metals and, in particular, for his discovery of, and coinage of the word, hysteresis.
It was said of Ewing that he was 'Careful at all times of his appearance, his suits were mostly grey, added to which he generally wore – whatever the fashion – a white piqué stripe to his waistcoat, a mauve shirt, a white butterfly collar and a dark blue bow tie with white spots.' he was regarded as brilliant and successful, but was conscious of his dignity and position. On appointment to head the newly created Admiralty codebreaking department, the Director of Naval Intelligence, Henry Oliver, described him as 'too distinguished a man to be placed officially under the orders of the Director of Intelligence or Chief of Staff'. His first wife, Annie, was an American, a great great niece of George Washington.

Referee report by J. A. Ewing on 'The Mechanism of...

Referee report by J. A. Ewing on 'The Mechanism of...