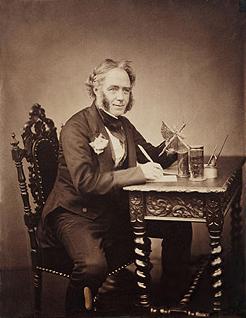 John Obadiah Westwood (22 December 1805 – 2 January 1893) was an English entomologist and archaeologist also noted for his artistic talents.
Born in Sheffield, he studied to be a lawyer but abandoned that for his scientific interests. He became a curator and later professor at Oxford University, having been nominated by his friend and patron the Reverend Frederick William Hope, whose donation was the basis of the Hope Collection at Oxford. He was also a Fellow of Magdalen College, Oxford. Westwood was a Fellow of the Linnean Society and president of the Entomological Society of London (1852–1853). Among the prominent writers and naturalists he associated with was James Rennie, whom he assisted in the editing of Gilbert White's The Natural History and Antiquities of Selborne in 1833. On 30 December 1892, not long after returning home from a convention in London, Westwood had suddenly collapsed of a cerebral haemorrhage which left him hospitalised. He slipped into a coma just one day later and died on 2 January 1893. His funeral took place on 6 January 1893 and was interred in St Sepulchre's Cemetery, Oxford.

Eggs and young of a land Crab not undergoing a met...