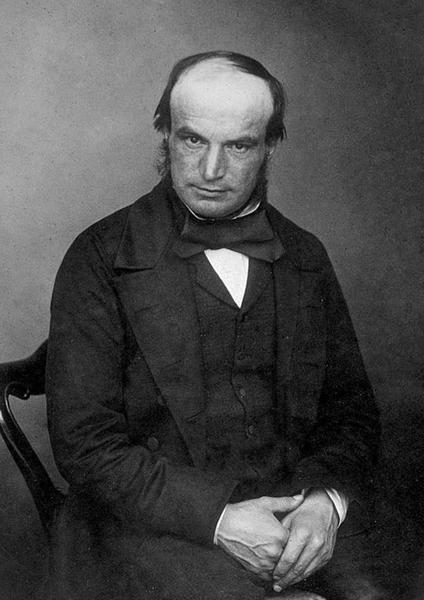 John Couch Adams FRS (5 June 1819 – 21 January 1892) was a British mathematician and astronomer.
Adams was born in Laneast, near Launceston, Cornwall, and died in Cambridge. The Cornish name Couch is pronounced "cooch". His most famous achievement was predicting the existence and position of Neptune, using only mathematics. The calculations were made to explain discrepancies with Uranus's orbit and the laws of Kepler and Newton. At the same time, but unknown to each other, the same calculations were made by Urbain Le Verrier. Le Verrier would send his coordinates to Berlin Observatory astronomer Johann Gottfried Galle, who confirmed the existence of the planet on 23 September 1846, finding it within 1° of Le Verrier's predicted location (there was, and to some extent still is, some controversy over the apportionment of credit for the discovery; see Discovery of Neptune). He was Lowndean Professor in the University of Cambridge from 1859 until his death. He won the Gold Medal of the Royal Astronomical Society in 1866. In 1884, he attended the International Meridian Conference as a delegate for Britain. A crater on the Moon is jointly named after him, Walter Sydney Adams and Charles Hitchcock Adams. Neptune's outermost known ring and the asteroid 1996 Adams are also named after him. The Adams Prize, presented by the University of Cambridge, commemorates his prediction of the position of Neptune. His personal library is held at Cambridge University Library.

Referee report by J. Lubbock on 'On the Secular Va...