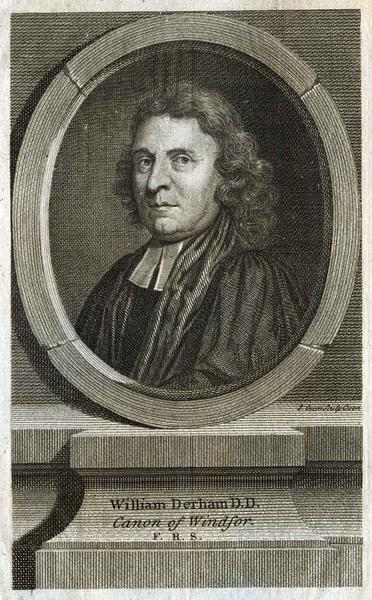 William Derham FRS (26 November 1657 – 5 April 1735) was an English clergyman, natural theologian and natural philosopher. He produced the earliest, reasonably accurate estimate of the speed of sound.

In 1709 Derham published a more accurate measure of the speed of sound, at 1,072 Parisian feet per second. Derham used a telescope from the tower of the church of St Laurence, Upminster to observe the flash of a distant shotgun being fired, and then measured the time until he heard the gunshot with a half second pendulum. Measurements were made of gunshots from a number of local landmarks, including North Ockendon church. The distance was known by triangulation, and thus the speed that the sound had travelled was calculated.

A journal of meteorological Observations made at P...

Proof, ''An abstract of the meteorological diaries...

Abstract of meteorological observations from Berli...