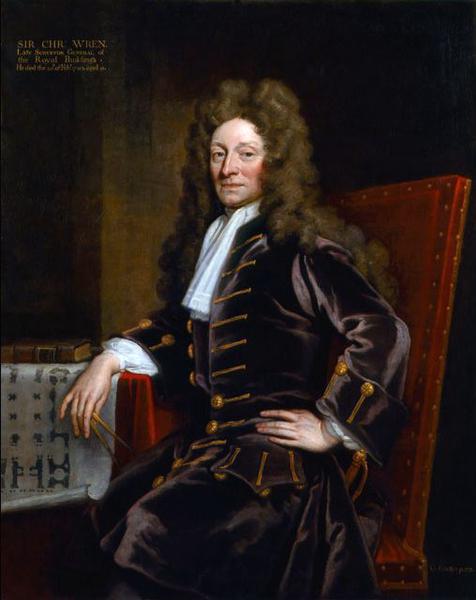 Sir Christopher Wren PRS FRS (30 October 1632 – 8 March 1723) is one of the most highly acclaimed English architects in history.

He was accorded responsibility for rebuilding 52 churches in the City of London after the Great Fire in 1666, including what is regarded as his masterpiece, St. Paul's Cathedral, on Ludgate Hill, completed in 1710. The principal creative responsibility for a number of the churches is now more commonly attributed to others in his office, especially Nicholas Hawksmoor. Other notable buildings by Wren include the Royal Naval College, Greenwich, and the south front of Hampton Court Palace. The Wren Building, the main building at the College of William and Mary, Virginia, is attributed to Wren. Educated in Latin and Aristotelian physics at the University of Oxford, Wren was a notable anatomist, astronomer, geometer, and mathematician-physicist, as well as an architect. He was a founder of the Royal Society (president 1680–82), and his scientific work was highly regarded by Isaac Newton and Blaise Pascal.