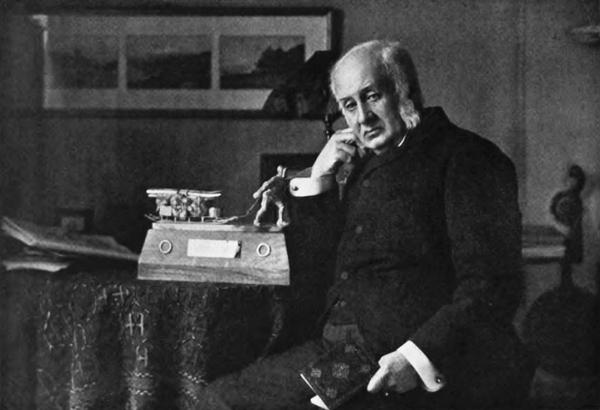 Sir Clements Robert Markham KCB FRS (20 July 1830 – 30 January 1916) was an English geographer, explorer, and writer.
He was secretary of the Royal Geographical Society (RGS) between 1863 and 1888, and later served as the Society's president for a further 12 years. In the latter capacity he was mainly responsible for organising the National Antarctic Expedition of 1901–04, and for launching the polar career of Robert Falcon Scott. Markham began his career as a Royal Naval cadet and midshipman, during which time he went to the Arctic with HMS Assistance in one of the many searches for the lost expedition of Sir John Franklin. Later, Markham served as a geographer to the India Office, and was responsible for the collection of cinchona plants from their native Peruvian forests, and their transplantation in India. By this means the Indian government acquired a home source from which quinine could be extracted. Markham also served as geographer to Sir Robert Napier's Abyssinian expeditionary force, and was present in 1868 at the fall of Magdala. The main achievement of Markham's RGS presidency was the revival at the end of the 19th century of British interest in Antarctic exploration, after a 50-year interval. He had strong and determined ideas about how the National Antarctic Expedition should be organised, and fought hard to ensure that it was run primarily as a naval enterprise, under Scott's command. To do this he overcame hostility and opposition from much of the scientific community. In the years following the expedition he continued to champion Scott's career, to the extent of disregarding or disparaging the achievements of other contemporary explorers. All his life Markham was a constant traveller and a prolific writer, his works including histories, travel accounts and biographies. He authored many papers and reports for the RGS, and did much editing and translation work for the Hakluyt Society, of which he also became president. He received public and academic honours, and was recognised as a major influence on the discipline of geography, although it was acknowledged that much of his work was based on enthusiasm rather than scholarship. Among the geographical features bearing his name is Antarctica's Mount Markham, named after him by Scott in 1902.

Official Report of the Voyage of the Discovery sen...