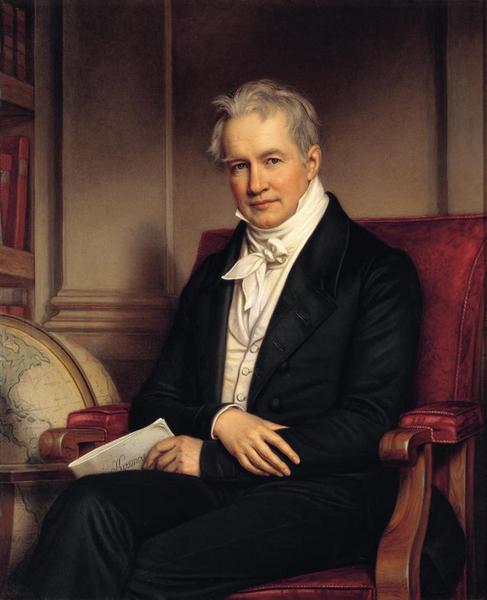 Friedrich Wilhelm Heinrich Alexander von Humboldt FRS (14 September 1769 – 6 May 1859) was a Prussian geographer, naturalist, explorer, and influential proponent of Romantic philosophy and science.
He was the younger brother of the Prussian minister, philosopher, and linguist Wilhelm von Humboldt (1767–1835). Humboldt's quantitative work on botanical geography laid the foundation for the field of biogeography. Humboldt's advocacy of long-term systematic geophysical measurement laid the foundation for modern geomagnetic and meteorological monitoring. Between 1799 and 1804, Humboldt travelled extensively in Latin America, exploring and describing it for the first time from a modern scientific point of view. His description of the journey was written up and published in an enormous set of volumes over 21 years. Humboldt was one of the first people to propose that the lands bordering the Atlantic Ocean were once joined (South America and Africa in particular). Humboldt resurrected the use of the word cosmos from the ancient Greek and assigned it to his multi-volume treatise, Kosmos, in which he sought to unify diverse branches of scientific knowledge and culture. This important work also motivated a holistic perception of the universe as one interacting entity. He was the first person to describe the phenomenon and cause of human-induced climate change, in 1800 and again in 1831, based on observations generated during his travels.

Report upon a letter addressed by the Baron de Hum...

Attempt to apply instrumental measurement to the Z...