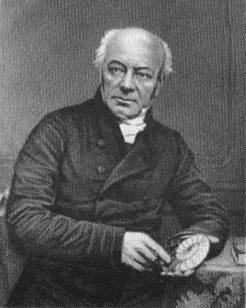 William Buckland DD FRS (12 March 1784 – 14 August 1856) was an English theologian who became Dean of Westminster.
He was also a geologist and palaeontologist, writing the first full account of a fossil dinosaur, which he named Megalosaurus. His work proving that Kirkdale Cave had been a prehistoric hyena den, for which he was awarded the Copley Medal, was praised as an example of how scientific analysis could reconstruct events from the distant past. He was a pioneer in the use of fossilised faeces, for which he coined the term coprolites, to reconstruct ancient ecosystems. Buckland was a proponent of the Gap Theory that interpreted the biblical account of Genesis as referring to two separate episodes of creation separated by a lengthy period; it emerged in the late 18th and early 19th centuries as a way to reconcile the scriptural account with discoveries in geology that suggested the earth was very old. Early in his career he believed that he had found geological evidence of the biblical flood, but later became convinced that the glaciation theory of Louis Agassiz provided a better explanation, and he played an important role in promoting that theory in Great Britain.

1822
Fossil hyaena jaws and other bones

Fossil hyaena jaws and other bones

1822
Fossil teeth of elephant and rhinoceros

Fossil teeth of elephant and rhinoceros

1822
Fossil teeth of rhinoceros and horse

Fossil teeth of rhinoceros and horse

1822
Vertical section of the great cave at Gailenreuth

Vertical section of the great cave at Gailenreuth

1822
Fossil teeth and bones of boar

Fossil teeth and bones of boar