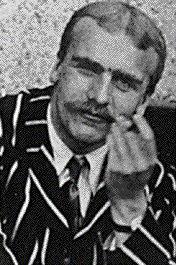 John Burdon Sanderson Haldane FRS (5 November 1892 – 1 December 1964) was a British-born Indian scientist known for his work in the study of physiology, genetics, evolutionary biology, and in mathematics, where he made innovative contributions to the fields of statistics and biostatistics.
He was the son of the equally famous John Scott Haldane and was a professed socialist, Marxist, atheist, and humanist whose political dissent led him to leave England in 1956 and live in India, becoming a naturalised Indian citizen in 1961. His first paper in 1915 demonstrated genetic linkage in mammals while subsequent works helped to create population genetics, thus establishing a unification of Mendelian genetics and Darwinian evolution by natural selection whilst laying the groundwork for modern evolutionary synthesis. His article on abiogenesis in 1929 introduced the "Primordial Soup Theory", and it became the foundation to build physical models for the chemical origin of life. Haldane established human gene maps for haemophilia and colour blindness on the X chromosome, and codified Haldane's rule on sterility in the heterogametic sex of hybrids in species. He correctly proposed that sickle-cell disease confers some immunity to malaria. He was the first to suggest the central idea of in vitro fertilisation, as well as concepts such as: the hydrogen economy, cis and trans-acting regulation, coupling reaction, molecular repulsion, darwin (as a unit of evolution) and organismal cloning. In 1957 he articulated Haldane's dilemma, a limit on the speed of beneficial evolution which subsequently proved incorrect. He willed his body for medical studies, as he wanted to remain useful even in death. Arthur C. Clarke credited him as "perhaps the most brilliant science populariser of his generation". Nobel laureate Peter Medawar called Haldane "the cleverest man I ever knew".